Groups should get to name themselves.

It’s a key part of forming a group identity: figuring out why you belong together and distilling it into a name. The Moody Blues, the Daughters of the American Revolution and the Beatles all picked out their own names. 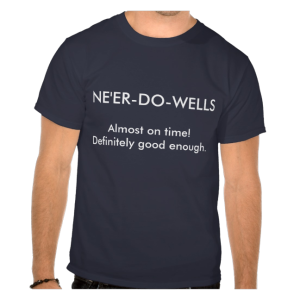 Some group names are descriptive: the Society for the Prevention of Cruelty to Animals, the Union of Concerned Scientists or the Green Bay Packers whose first jerseys were donated by a local packing company. Some are aspirational, such as the Fighting Irish of Notre Dame or the Fighting Koalas of Columbia College.

One great reason to pick out you own name, is that when someone else picks out a name for you, nine times out of ten it’s derogatory. ‘The Beatles’ is way better than ‘The Longhair Lads from Liverpool’ and ‘Packers’ is a little better than ‘Cheeseheads’ too.

People with ADHD get labeled with plenty of names.

The community of people who have ADHD has enough common experience to constitute an identifiable group. Until we figure out that we belong in this group, other people are plenty busy naming us. ‘Lazy’ is probably all-time number one. ‘Space cadet’ and ‘space queen’ are recently common, while ‘ne’er-do-well’ and ‘scalawag’ were favored back in the 1700’s.

Actually, ‘ne’er-do-well’ is the best descriptor I’ve ever heard for someone who always falls short of his or her real potential. I’ll never forget the day I figured out that I was always just getting by at the last second, but never doing well. It was not a day to memorialize with a logo-T.

Doctors have done something time-saving but disrespectful over the years, namely referring to a patient by his or her diagnosis. The woman who is diabetic might be referred to as ‘the diabetic’ or the man who had a heart attack as ‘the MI’. Instead of referring to ‘the man recovering from successful surgery to remove a tumor in his brain in room 427’, a doctor might try to find his nurse by phoning the nurses station and asking, “Whose got the brain tumor in 427?” That is wrong on so many levels.

Early in my medical training, I found myself referring to people by their diagnosis, because it was quick and useful when I was overworked and tired. One of my fellow residents referred to a certain patient of mine as ‘that back surgery in 14B’.

‘That back surgery’ was a retired physician and public health officer who had overseen an entire state for almost 50 years, through unimaginable, deadly epidemics of smallpox and polio. He had directed quarantines and vaccination programs that saved more lives than I’ll ever care for. It was a privilege to care for him, and I bristled when I heard him referred to by the procedure he came in to undergo.

It’s not that the diagnostic names aren’t handy, it’s that there are respectful alternatives. ‘The distinguished doctor you might owe your life to who now suffers from back pain’ is about right. ‘The person with back pain’ would be a fine alternative if you’re totally rushed.

ADDer is a dumb name. Don’t call me that.

It’s becoming common–mostly within the ADHD community–to refer to those of us with ADD or ADHD as ADDers. That’s wrong at several levels. First, it has two different pronunciations.  You can say it the four-syllable way (A-D-D-ers), but that doesn’t save much time over the six-syllable ‘people with ADD’.

If you say it the two syllable way (add-ers), you do save half a second, but it sounds like snakes or adders. It also sounds like a reference to people who add things up. Human calculators.

Second, ‘er’ is the suffix for groups of people who do things in common: fixers, movers, hair-dressers. It doesn’t make sense with ADD. I don’t do ADD. I have ADD. People with flu aren’t flu-ers and people with gout aren’t gout-ers.

Third, ‘ic’ is the typical suffix common for diagnostic groups: asthmatics, diabetics, epileptics. I don’t want to be called ADD-ic.

As we said, referring to people by a condition lacks respect. Calling my patients ‘ADDers’ misses too much of who they truly are:

The fourteen-year old dancer and honor student with ADHD.

The boy who wants to be an astronaut and has ADHD.

The therapist with ADD who finds joy helping adolescents with ADHD adjust and cope better.

The grandpa with ADHD who loves to play outside with his grandkids.

‘Four ADDers’ isn’t a good enough descriptor for these people. I get that we have a desire for brevity and group identity. I understand the need to be with others undergoing the same struggles. But until someone comes up with a moniker that is both descriptive and respectful, ‘ADDer’ is out. I’m going to spend the extra two syllables on ‘people with ADD’.